Hey everyone, welcome back to another special post for the Time to Shine series. It was lovely meeting Vicki at the recent Mama Squad Assemble in Clapham.

AKA Vicki NICU Mum, The Honest Confessions of a NICU Mum – talking all things NICU, HEART, parent and toddler related with honesty, hormones, humour and finding any excuse for a gin! Hoping to help and comfort others going through the same thing and to improve the NICU experience for all (neonatal intensive care unit).

OK, over to Vicki as she shares their brave and touching story…

Can I ever live up to being the mum my heart warrior superhero deserves me to be?

When I look back at my achievements, I think having Elijah was far by the best one. Yes, I had good GCSE’S and A Levels and even passed the first year of a law degree! But, I haven’t run a marathon, or won a trophy or medal. I don’t really think of myself as achieving much. Before I had Elijah I have to admit I wasn’t even that charitable! When I fell pregnant I envisaged I would be an amazing earth loving, organic mama with her child at the centre of her world. It didn’t really turn out like that though.

At just 12 hours after birth, Elijah began to have dusky episodes. He was going purple for a few seconds. He was admitted to the NICU where they diagnosed him with Tetralogy of Fallot a serious congenital heart defect, he also suffered a neonatal stroke causing seizures. This stopped after he was put on medication, but they didn’t know the impact this would have on Elijah’s development. Alongside the fact that he already needed surgery to repair his heart. My one greatest achievement giving birth to a healthy baby boy, well it seemed it was taken away from me.

I was also very ill after the birth and I couldn’t even breastfeed him. To spend hours at your son’s bedside in NICU not wondering if or when he would come home I felt so helpless. I most certainly did not feel like a mother. I didn’t know what I could do to help my baby. Surely a mother would know? Would be able to make him better? To be able deal with what was being thrown at us? Instead I went to pieces, I stopped eating, began self-medicating and chose to discharge myself after 7 days. I went home, with an empty car seat. While Elijah remained in NICU for 2 more days.

We finally could bring Elijah home 9 days after I gave birth to him, with regular check-ups and a looming surgery date. I feel like I failed Elijah as a mother as I couldn’t get over the fact my baby needed this life threatening surgery and that I may lose him. I couldn’t come to terms with it as a result it really affected me as a person, and as a mother.

I was depressed, anxious, not eating, barely sleeping and I shut myself away not wanting to explain myself or the situation to anyone. I feel that Elijah deserved so much better in those first few months, that I should have taken him out, I should have been the fun mum, and made as many memories and experiences as I could. I felt so much guilt that it was me that caused this, they suspected the delivery may have caused the stroke, well I delivered him this was my fault. I carried him for 9 months, grew him, and felt I had failed at that too.

The surgery was scheduled for when Elijah was 6 months old after a lot of badgering and putting Elijah on the cancellation list. I feel as a mother I should have been strong, to be brave but I wasn’t. I was as far from that as you could possibly get. Elijah was so brave, the definition of brave. Yes, you could say he didn’t know what was really happening but I looked at him in his gown, not even flinching when the black mark was put on his chest. He sat on me while he was put to sleep and then they took him.

They took my child to open him up and repair his heart. I couldn’t even kiss him goodbye. The heart that I felt responsible for not growing properly. Was it my fault my baby was having to go through this? This huge surgery that so many of us don’t have to have. I mean the worst thing I ever done was fall over and needed to have my eyebrow glued back together. I had never even broken a bone and my child came back up from surgery after being opened up, having his sternum broken and heart repaired. After all, that he was still trying to wake up when he heard my voice.

I looked at him lying there with his chest drain stitched in, draining the blood and I knew my son was a warrior. A fighter, and the strongest person I knew. At just 6 months old he overcame this surgery and fought to recover so well we came out in 5 days!

You would think that is where the story ends, the surgery was over, Elijah was well. I could go back and be that amazing mother I imagined myself to be. Wrong. The NICU stay and surgery had mentally really taken its toll on me, I just couldn’t get over it. Get over the fact my baby had been through this, that I was robbed of my healthy baby boy and picture perfect motherhood journey.

I did the right things, I held him the right way. I took him to baby classes and got him a place in a top nursery. I hand made his purees every day. I felt I was just going through the motions of being a mother. Elijah was the one that had open heart surgery not me, what right did I have to keep feeling like this? To keep letting it taint me being the mother I could be. That he deserved. I knew I had to get some help, I was irritable, snapping and my relationship with Elijah and Elijah’s dad were suffering as a result.

I went to the doctors and was put on medication, I was all referred to have counselling and this is where a Post-traumatic stress disorder (PTSD) diagnosis was made. Elijah was going from strength to strength, did he let the surgery or a neonatal stroke affect him? Did he hell. As time went on I began to see I should take example from him. To be strong, to be happy and smile no matter what. He really is the happiest little boy. He makes me beyond proud to be his mother. How well he has coped, how far is has come. We have just been discharged from the development clinic as Elijah is doing so well! He is so caring, he is protective over me and is so loveable. 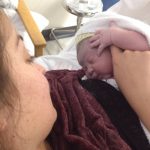 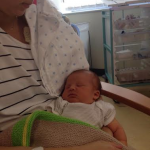 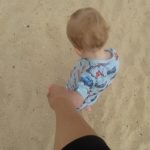 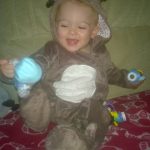 This is why I know my little boy is a heart warrior and he is my super hero. I have never looked up to or learnt as much as I have as I have from him. He isn’t even two years old yet he has taught me so much, he has changed me as a person. He has also taught me to be a mother. I know he loves me no matter what. I just hope when he is older and reads this and my other blogs back he doesn’t think I failed him as a mother. As I tried, I really did but it was so hard watching my own child have to go through this, and having the guilt that it was all my fault.

If Elijah has achieved more than some adults do in just under two years, I wonder what he will achieve when he is older? He has already taken part in his first charity fundraiser and helped to raise nearly £1000! He is considered developmentally quite advanced for his age, and doesn’t let anything especially not having a small thing like heart surgery get in the way! I will always live in fear I am not a good enough mother for my little superhero. I just hope he is proud of his old mum when he is older, and that I can live up and be the mother of the superhero that I gave birth too.

Please be CHD aware, 1 in 100 babies are born with a congenital heart disease.

Please check out Vicki’s social media pages, she’s a lovely writer and also writes for a good cause.

Or over at the blog Confessionsofanicumum.blogspot.co.uk/ where you can also see Vicki’s badges  or bracelets worn to show support for a NICU MUM.

Thanks again to Vicki and  Elijah for sharing your heart-warrior story. Sadly, many of us know of a baby who had ended up in the NICU.

Would you like a piece of your writing to appear on Time to Shine?

Time to Shine lets peeps (I know and don’t know) “borrow my blog”. The main reason for hosting this is because everyone needs their time to shine, be creative and write some nice stuff. It’s great learning about others’ real-life experiences and views on things. Writing is like a little sanctuary. Plus, not everyone wants or has their own blog.

Recent Time to Shine posts have been about confidence tips and moving abroad with your family (finding your new normal).

If you would love to write something for Lucky Things, drop me a line at sunita@luckythings.co.uk

Remember you don’t have to be a blogger to be featured and you can write about just about anything from your story, everyday things and top tips.

Photos featured in this post have kindly been provided by and published with permission from Vicki Moore.

2 thoughts on “Time to Shine: Can I ever live up to being the mum my heart warrior superhero deserves me to be? By guest Vicki NICU Mum”