Hey there, here’s part 4 of our IVF journey. Hopefully you’ve had a chance to look at part 1 (I’d like to be a mummy), part 2 (operation time) or part 3 (finally starting treatment). No worries if you haven’t, part 4 is like it’s own little story. So a quick round-up of where we got to in part 3 of our precious IVF journey. At the end of part 3 in July 2012, we had got through the first few stages of what were our own Olympics; the egg collection was successful (we got the one egg that existed) and the embyro transfer went well. I was then walking around with an embryo in me and it could actually turn into a baby.

Time to find out if things have worked

With IVF there are no guarantees. Science is incredible but it can’t always create the results it intends to. Although the egg collection and actual embryo transfer went OK we couldn’t assume everything else was going to work out. After the embryo transfer I was advised by our nurses and consultants at CRGH to:

I obviously adhered to the recommended guidelines. I was feeling extra cautious. On the way home from CRGH we grabbed a taxi. We asked the driver to go slowly over the speed bumps. I was of course worried that sudden movements may upset the embryo. When we reached home, I did go to bed. I was exhausted from the emotional process of doing the embryo transfer. I rested my hand on my belly as I started to nap.

It was a weird feeling that I could become pregnant within the next two weeks. Days went by pretty slowly. I booked a couple of days off work to have some chill time. I popped to our local shops and as it was Summer I bought a pair of shoes in the sale. I then started to worry if I should be carrying the shopping bag?! I realised I was being over the top and carried on shopping. It was nice to be out and about.

The next day I went to the supermarket. I felt like treating myself to comfort food like doughnuts! I did push a big trolley although it only had a few items in there. I then started to worry about lifting the bags of shopping into the car. So I asked one of the till assistants if someone could help me take the shopping to the car. The immediate question was “Oh when are you due?”. Crikey, did I already look pregnancy after a few days of the embryo being implanted? Of course not, but that’s the first thing that people think about (or maybe they thought I was being a supermarket diva!). So I ended up saying at the till that I’d just had an operation. As we walked to the car, I explained that it was actually an IVF procedure.  I was pretty OK about telling her, maybe because she was a complete stranger. She told me how her sister in law had been trying IVF and after several tries it did work. I nearly burst into tears in the car park. That story gave me a bit of hope and strength.

This date that still brings tears to my eyes. This was the date the clinic asked us to do the pregnancy test. We didn’t expect things to work out for us. We had to prepare ourselves for the worst. We decided to do the test in the evening once we were both home from work. About 9pm we did the test. The test was positive. We didn’t believe it. We did another test and the result was the same. There was a 10% chance of things happening and we ended up being in that 10%. I remembered what one of my colleagues said to me at work. It was like living in a dream. We still didn’t get too excited. We both remained quite calm and agreed we needed to do another test the next morning. I soon fell asleep, but Mr.H then spent the next few hours researching how accurate off-the-shelf pregnancy tests were!

I woke up the next day and I bought some more pregnancy tests as soon as I could. I did the tests. They also gave a positive result. I called CRGH with our news and they asked me to come in for a proper pregnancy test the next day. A whole day and night before we got to find out if the results were for real. I guess it was a magical feeling knowing that I really could be pregnant. I was walking on air. It’s the only way to describe it.

Time for the dreaded injections…

The test at the clinic was fine. There really was a little baby in me. I was able to tell my mum that I was pregnant at her birthday celebrations that week. In the past, I always felt sad that I couldn’t give her the opportunity to be a proper grandma (or nanee as she would be known as in our Mauritian family). Now I could hopefully give her the best birthday gift EVER.

The nurse at CRGH soon checked my hormone levels again and that’s when the medicine regime kicked in. I had to start my daily injections to reduce the chances of a miscarriage and taking my daily doses of progesterone to maintain my hormone levels. From a young age, I’ve been scared of needles. I reminded myself that I did fairly OK with the blood tests throughout the IVF.

Previously I would often faint before having blood tests, probably because of anxiety. I remembered what my school friend H told me about her own IVF experience. When it comes to the injections, she said “they’re just like a little pen. You’ll soon get the hang of it and you will be able to do them yourself”. In just a few sentences, she had coached me into doing my own Clexane injections. I’ll always owe her for that.

When it came to doing the injections for the first time, I wasn’t brave or in control! Luckily, Mr.H was fine about administering them. Please don’t suddenly sneeze or slip Mr.H! There’s a whole different level of closeness when someone is giving you the medicine you need. Respect to Mr.H as he never complained once about the whole injection thing.

Mr.H suggested we play some music whilst we did the daily injections. It was a good way for me to relax. I was too nervous and I was probably making him anxious too. To this day whenever Erykah Badu and Robert Glasper tunes come on the radio, I smile because it was Dr.H injection time! It was important we did the injections once a day and at the same time. We agreed 10pm would be a good time as I could go straight to bed afterwards. When Mr H had other plans, my Mum came round to help (this was also fine as she used to be a nurse). After a couple of weeks, I then started doing the injections myself. It did feel quite an achievement. My friend was right, I could do it. I knew it would only take a few seconds and I was doing it for my little baby. To this day, I have no idea how I got through about ninety injections during the first twelve weeks of pregnancy.

A cloud of worry during the pregnancy…

As with any pregnancy, a cloud of worry hovered over everyday life and it affected us both. At times I was just so grateful that I had the chance to be pregnant and experience having a bump. A small part of me was terrified that this could easily be taken away from me at any moment. I have never experienced a miscarriage like several of my friends. But the fear of miscarriage was there, despite being given medication to try and prevent it. For some reason, I wasn’t convinced I would end up having a baby despite carrying a huge bump. On a brighter note, I suddenly started to crave Marmite so little things like that made me feel very pregnant.

You have more regular scans when your baby is conceived through IVF. For our pregnancy,  I had scans from the two-week mark and then every fortnight until 16 weeks. They spotted that the ovarian cyst had sneaked back and so they also wanted to check it wouldn’t disturb the pregnancy.

Before every scan in my first trimester we would wonder what they would see. I never forget watching what happened in the film Marley and Me. I watched that film on a flight out to New York with Mr.H a few years before and I cried my eyes out. For my pregnancy, all of the scans felt terrifying. People often view scans as exciting things when you’re pregnant. Fortunately, everything was going to plan.

We were obviously cautious and didn’t share our news until after the 12 week scan. I remember telling my big brother the night we were all DJ-ing at a charity event in the September of 2012. I said there were actually four of us DJ-ing that night; my brother, Mr.H, me….and bump. Don’t worry I wasn’t lifting heavy record bags like I used to at uni. It was a lovely event as a selection of our friends turned up so we could also share the news with them. I always remember Mr.H’s boss reassuring me that the baby would be very well protected in my tummy. I also announced my pregnancy to my work mates that day. I could finally explain to the lovely girls in my team why I had been on so many random and short-notice appointments over the past four months.

Here’s three things I never thought I’d do during my pregnancy:

Time to have baby

We knew we were expecting a girl at the 20 week scan. Six months later, it was my due date and we ended up going into hospital that night as contractions started. Big Munch arrived into the world after a whopping 36-hour labour involving nearly every labour drug you could take.  So much for my birth being medication-free.

After delivering our baby girl, the labour ward consultant called us “the ten-percenters” after finding out about our IVF journey. One of the songs I remember hearing on my “time to have baby” playlist as I cuddled baby for the first time was Bill Withers’ A Lovely Day. On the day I went into hospital it was snowing. We left the Royal Free Hospital in Hampstead a couple of days later with our little person and the sun was shining. It was only after the birth that I really started telling people that we did IVF. 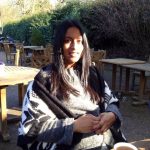 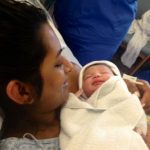 I’d love to hear what you thought or felt when reading this post. So feel free to leave a little comment below… Thanks so much for reading about our IVF journey. x Sunita